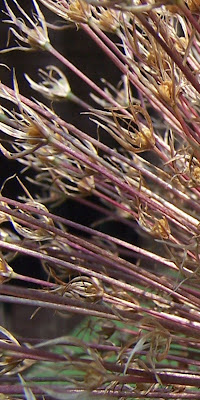 Just had the scariest two seconds of my life when I read as an AOL headline that a teenager got killed at a Six Flags today. Bro1 went to Six Flags today. He's not home yet. He's technically still a teenager. *gulp* I clicked pensively. It wasn't him. While that haven't released the name, it was the wrong state. My condolences to the family. I cannot even imagine...though for those two seconds I almost did.

Went shopping with the rest of the family. Got what I hope is the last supplies purchase for my jewelry commission. It's coming along nicely. I'll try to get so prelim pics up soon.

Trying to let go of...the thing that I refrain from detailing on the interwebs. (Doing so could either make me intriguing or just annoy people.) It's hard. Really. I can't believe how much I'm clinging...mentally most of all. I'm such a cerebral person. *sigh*

Post Picture: Severely cropped image of one of the dead aliums. There was a heat wave a week or so ago. It killed them in a day. Sad. But I can spot them now...and know the name. That makes me happy.
Posted by becca.elpy No comments: