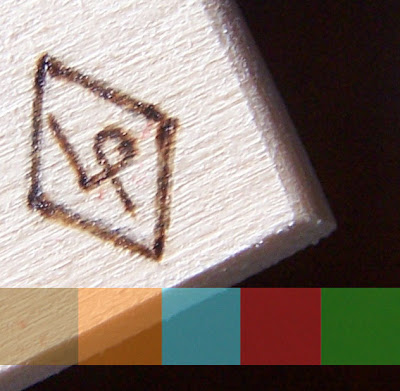 For Black Friday and into Cyber Monday, I'm running a sale in the elpy shop. Free shipping domesticially. $1.50 shipping to all international destinations.

Watched Heroes yesterday. Yahoo had done a list of shows that appeared to have or were in the process of, 'jumping the shark. Then they suggested 86-ing Mohinder. At first I balked. Now, being as objective as I can, I have to say they were right.

Heroes has always required me to suspend reality. It's a show about people who can fly, or not die. It's like a comic book but with real people. (If it had been animated it would have been lame.) That the story doesn't entirely come together every week, that things go unexplained, doesn't bother me as much with this show as with, say, Lost.

But it's broaching ridiculous. The characters are getting annoying, redundant or laughable. The villians are just angry, the good guys are whiny, (Sylar is unfortunately both) and what in the world is Mohinder's problem? What was that body part he hacked out of his experiment corpse? How did he stick himself to wall? Why did he ooze out naked?

I can't remember why Claire is mad at her dad. What does she think she can do besides be immortal? She was a cheerleader; pom-poms are not nunchucks. Her plan to save Peter last week by jumping out the window she sent his mortal self out of, didn't make any sense.

I don't know why Parkman is even there. Seriously. His skills at mind-reading leave much to be desired. He loses reception more easily than my cell phone. Does the face-turning thing help?

I wonder if, though it had a strong following before the writer's strike of '07, it will become a post-strike casualty. I hope it doesn't. That somehow they can recover the glory it had in season one. (Admittedly, Claire, Parkman and Mohinder were somewhat annoying then, too.) Right now they seem to be Heroes without a cause. Perhaps a new tagline is in order.

Post Picture: Lifted from someone via a Google Images search.
Posted by becca.elpy No comments: 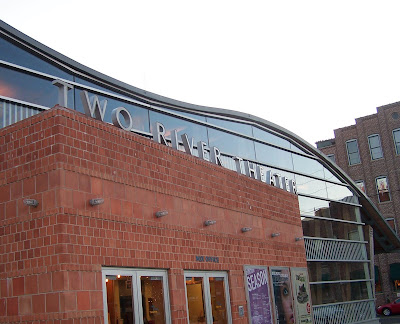 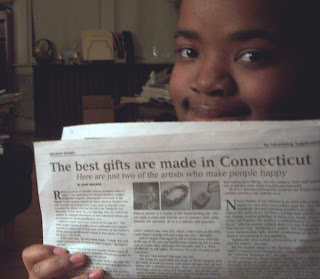 I was in the paper today. My mom bought 9 copies.
:)
Posted by becca.elpy 2 comments:

My cold is largely gotten over. I'm thankful. I didn't want to be all drowsy and stuffed up for the show on Saturday. I still get pretty tired, though. So I'll probably sleep the whole way back home. hehe

News:
Burned 4 sets of magnets yesterday. Went to seal them, polyurethane had dried up. It was my fault. Bummer.

So we're in a state of flux, again... as a family. I was a bit of an emotional wreck when I found out (about my dad not the polyurethane). I'm not sure I handled it the best way. I'll adjust I'm sure. 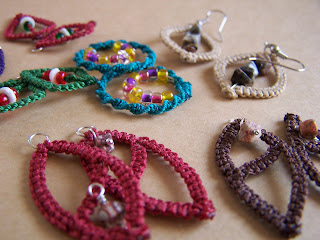 The weekend blurble is a day late this week because I spent most of the weekend, slurping down lots of water, juice, ginger ale (thought of as a cure-all in my family) and tea while battling a cold. I'm winning!

The show this weekend has turned into a super-short family vaca. I hope it goes well. It's been an experience. I'm learning that most of the business owner stuff is a constant learning experience. I like that...most of the time. I still won't be able to take credit cards, I'm having a hard time proving that I'm me since I don't have much of a credit history. I know I'll wish that I could, but it's been all I can do to ensure that I get there so...any sales I get will be a blessing. Next year, baby! Next year.

I've thought up some intense ideas involving macrame. They'd probably be expensive and limited. But will have to see. They're in the super-baby stages of development.

Post Picture: Earrings made for Made For You this weekend.
Posted by becca.elpy No comments: 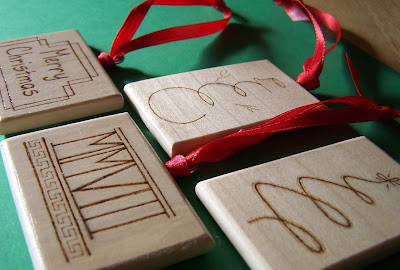 I'm not sure what to focus on as a post today. All the ornaments are listed now. I'm really happy with them.

Short and sweet today.
Posted by becca.elpy No comments:

By Its Cover- Little Town Where Time Stood Still- pt.2

By Its Cover is my completely independent 2-part book review column. Selections are made based entirely on the book's cover. I'm testing the old saying in my quest to find new authors. 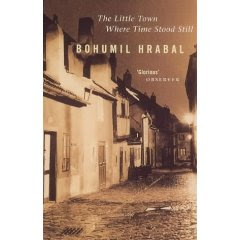 Part One
If you know me, you know it rarely takes me long to finish reading a book. Even Anna Karenina I finished in the 3-week library lending period.

It was a dual edition, it had The Little Town Where Time Stood Still and Cutting It Short. It takes place in a small Czech village. At times it was sheerly brilliant, the imagery and the language, at other graphically disturbing, a chapter about a pig-killing. I felt like I missed something. Maybe something was lost in translation, maybe I'm too straightforward to see the genius that was said to be Bohumril Hrabal.

I'll try the 'random book selection' thing again. Hopefully, it will be more of a success for me.
Posted by becca.elpy No comments:

Labels: by its cover, review 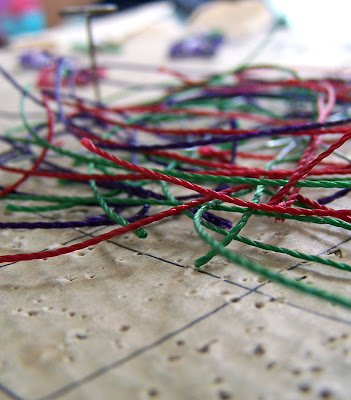 I started this weekend to seriously take stock of what I have and what I need to make for Made For You. I tried to tell myself that I wouldn't wait until two weeks prior before I began working. That didn't exactly work.

So armed with my list of items to finish before I make new or more of existing things I create. And wonder why having a show coming always super-charges my creativity, ideas come out of nowhere.

Post Picture: After making Acutes yesterday. I thought the colors were somewhat majestically Christmas.
Posted by becca.elpy No comments:

Took another blogging break. If you ever want to know what I'm up to, you can check my Twitter. If I have internet access, I update there.

Had to sit down and do un-fun things, setting up tax account for the NJ show, editing pics from my portrait session...one is pretty rockin'! (My dad said so, he's my toughest critic.)

Over the next week I'm going to look over what I have and figure out what more to make, what new to make. I'm not sure if I'll start any really new projects this year. Again, two that I hoped to get to, will have to wait. But I looked over my Flickr and realized I've done a lot. I need to work on being so critical of myself.

Post Picture: Coasters that were a custom request. I put them in the shop to as specifically made to order.
Posted by becca.elpy No comments: 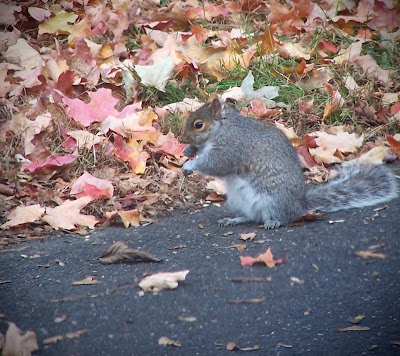 Post Picture: Super-chunky, and completely adorable squirrel in the driveway. He had a pot-belly and happily munched on ever maple seed he could find.
Posted by becca.elpy 1 comment: