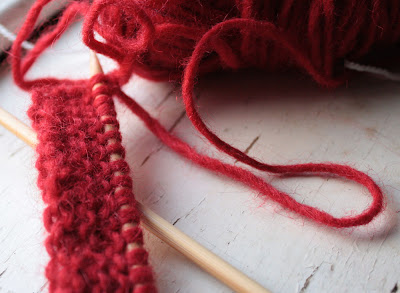 Today Dad had to go update a friend's computer. He took me with him because...well, I'm not really sure. He likes to pick a child, me or one of the brothers, at random to accompany on his little trips. I was griping about it a little, because sometimes I wish he would give a reason for choosing me. Bro2 would have been a better choice. He's into that stuff.

I'd brought my camera and the lady of the house was asking about it and photography. She pulled out two large knitted...shapes. I asked what she was making. "A sweater," she said. Before I knew it I was plopped on the sofa next to her with a skein of red wool yarn and a pair of needles.

A lot of rapid-fire thots pinged around in my mind. How crafting is so communal. How it took her all of five minutes to show me what to do, but the impact it will have will last longer. Knitting is something I've wanted to try for a while, but just kept shelving for later. How if I'd really made a stink and stayed home...I'd be clueless still.

Post Picture: The first few rows and the skein and needles. I'm enjoying it so far.
Posted by becca.elpy 4 comments: