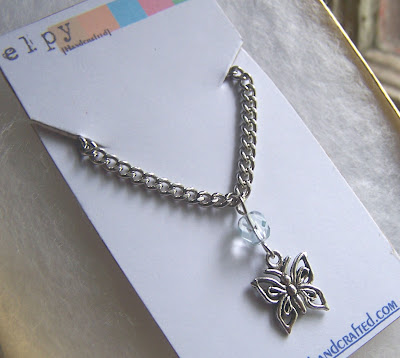 I think each of the following things could be their own post. Sometimes it's better to consolidate.

Two of Etsy's founders are leaving the company. As an older Etsyan, one who remembers when it was just the four guys running the whole site, the news came as a bit of a shock and a touch of sadness. I wish them the best, though.

I changed my blog's url. It's no longer 'thelpblogs' but 'not-rachel'. Be sure to add the dash or you will get taken to another blog that has my old template and probably be all-around confused. Don't want that. :)

I'm going to be doing a show in my town. Yeah, baby. I should probably alert the CT team. I think there are a few of us in Northern CT. I'm excited and trying not to freak out. I'm making lists and checking them twice, ordering supplies, and working out display ideas.

My Twitter people are much faster at reporting the news than even Google. There were early morning tweetings of who McCain had chosen for his VP. When I googled, they put up related searches of 'mccain potatoes'...among others. It took about an hour for Google to catch up. Love my Twitter peeps. (I found out the Etsy news on Twitter as well.)

I could go on, but I've run together several long posts.