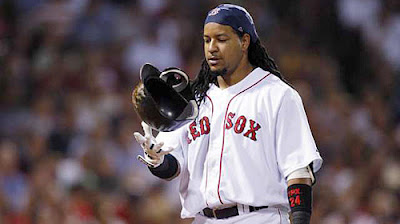 I live in a torn state. It's politically blue but sometimes bleeds red for the Boston Red Sox. Today, they traded Manny Ramirez, arguably one of the best pure hitters in baseball history.

Now, I'm a Yankees fan by birth, (if you're not one it can't be explained) so I'm not really sad to see him go. He usually killed the Yankees. And the 1-2 punch, though actually it was usually 3-4 or 4-5, of he and Ortiz was somewhat lethal...in athletic terms. They were monsters at the plate.

I just don't understand it logically. Ramirez had a whopping 2 months left on his monster contract. The Red Sox couldn't tough it out, Cowboy Up, for 2 more months? Were his skills eroding that much, was his mind that far gone? They still ended up paying $7 mil to the Dodgers to cover the remainder of his salary.

The Sox seem to have gotten stiffed in the trade-deadline deal. The Dodgers got a free player for two months, the Pirates pick up scads of prospects, the Red Sox...get Jason Bay? A National League hitter, from the Pirates. (somehow they worked out a three-team deal.) Does the name Renteria ring a bell? NL hitters struggle switching to the American League. Not all, but...is it worth it? For two months? He'd have been gone, then and the Sox might have won another Series. That hurts me to type.

Baseball is my secret love. I do normally right about my Etsy shop and crafty things, but this was too huge a deal and my confusion/opinion too strong not to be blogged. Now that I've thrown enough links at you... 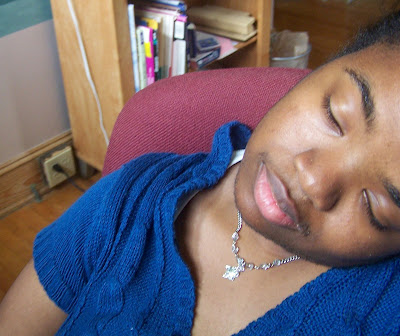 I went back to the Billings Forge Farmer's Market. I'm thinking I may be too expensive for farmer's market. People are coming to buy food, and the food is pretty inexpensive, though local and yummy. Yesterday I was next to a guy selling $1.50 trays of produce. Yeah. Even the Dots look like a lot then. I think I always knew this, but...well, that's a long story.

Today was better than yesterday for me as a person. I wasn't as stressed out, maybe because I've done that market before. I sold one pair of Dots earrings that hadn't made it to the shop, yet. It was 91 degrees with very little breeze and a lot of humidity. That's the CT River Valley, for you. I was extremely thankful for the tent.

So, farmer's markets are a great way to get started with shows. I'm going back to both next week because I said I would. After that, if sales aren't any better, I may move on. Still...I'm glad I did them. Met a lot of people, gave out cards and got tons of compliments. It's encouraging for the most part.

Post Picture: Me after we unpacked the car. Hot and tired.
Posted by becca.elpy No comments: