I'd gotten in the habit of blogging a fave from my ThisNext picks on Tuesdays. Then ThisNext kinda crashed. On with the feature!

This poster from Studio Mela makes me smile. I recently purchased the postcard version to add to my board of loveliness. I had to share it here as well. Went out with an old friend on Saturday. It was really nice, we hadn't seen each other for a while. We walked around a park, got a little lost, had dinner. Fun, fun.

I'm becoming increasingly convinced that I love Masterpiece Theater. Cinematic presentations of the classics, particularly Dickens, can be so much more enjoyable than slogging through the prose version.

Post Picture:At the park. In a few weeks, those arches and bushes will be covered in roses.
Posted by becca.elpy 1 comment: 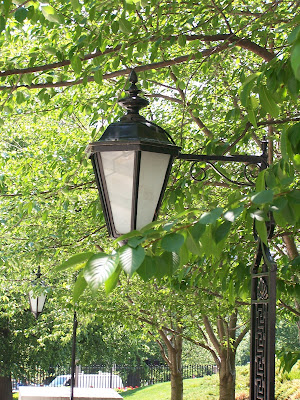 Regular posting shall resume in a day or two...
:) 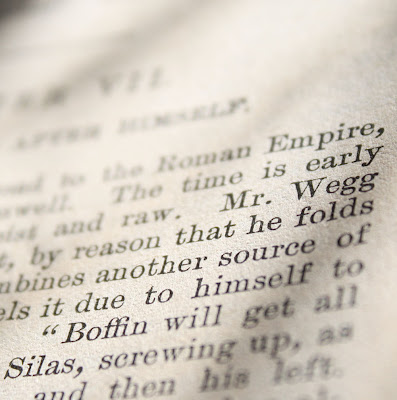 I read on a blog more popular than mine a list of things that you shouldn't blog about because they're generally not interesting. But I kinda don't agree with all of that list.

I read a mix of blogs, Etsy friends, shopping/handmade, Twitter followers, indie/small business tips. (There is some overlap there. The ones I find most interesting are the ones where the writer gets a little personal. I don't need to know in depth the personality of your cat, but a funny story about what happened apart from your general online persona is fine.

So I guess...what kinda blogs do you like to read?

Post Picture: Our Mutual Friend in shadows. I'm in the minority of folks who reads (or tries to read) Dickens when they don't have to.
Posted by becca.elpy 2 comments:

By Its Cover- The Real Minerva

By Its Cover is my completely independent book review column. Selections are made based entirely on the book's cover. I'm testing the old saying in my quest to find new authors.

I chose this because one of my Etsy friend's name is Minerva and she's awesome. :)

So it's set in the 1920s for most of the story. But little is said or done that couldn't have made it set today, which is a little sad...I'll explain in a minute.

Their paths further intersect when Penny runs away from her mother, angry that she, Barbara, and Irene's father, their employer, are having an affair. She ends up 21 miles away, at the Maagdenbergh farm just after Cora has given birth to her baby girl.

Penny stays on as a hired hand, helping Cora care for the baby and the house. She vows in her heart to protect them as she learns, first secretly and then more openly, of Cora's past. On the other side of town, Barbara's story continues with her falling in love with Mr. Hamilton and Irene seeing that as the ultimate affront to her sick mother memory so she...well, I won't give away the ending.

The part that saddens me is the way the town looks down on Barbara and Cora is pretty much the same as it would be now, only people may be less vocal about it. Progress, where art thou?

I'm sure someone could give this a more political literary analysis. I chose to take it as it is, not looking for hidden meanings or inferences. It's beautiful and a little haunting. I enjoyed it.
Posted by becca.elpy 1 comment:

Labels: by its cover

i love the sleeves...and the color.
the style is fresh and funky. 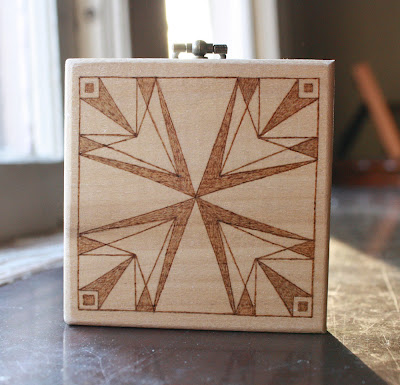 I go in and out of creative phases. I want to knot and will crank out umpteen pairs of earrings. I want to burn and will finish duplicates of all the magnets I have listed. At the moment, I want to photograph things. I have lots more bits to add to the Closet and oodles of things to rephotograph. So I hope I can get it done before the urge passes and I get all frustrated with having so much to photograph.

Desire to create is pretty low. I really want to concentrate on presenting what I have in the best way possible, get that stuff selling regularly. Most of my ideas have been made, even if they aren't listed (in the case of the woodburned art- see pic). So I don't have that pressure in my mind.

Post Picture: One of my pyro art pieces. They were to be coasters, but those patterns are just a tad to involve to just set a cup on. But I'm not having an easy time figure out how to photo them. That one's nice, but I should show it hanging on a wall or wall-like area, yes? Walls in my house are florally-wallpapered. :/
Posted by becca.elpy 2 comments: 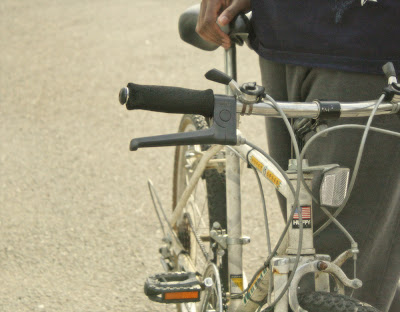 So I didn't pass the driver's test. Long story. I was very mad at myself. But the DMV guy being in the car just totally freaked me out. And info from the 8-hour course plus what I've read in the driver's manual was all melding together. I was incredibly nervous...and it was raining.

I'm scheduled to retake it the first week in April. That same guy said he'd go with me again. At least I'd be a little bit more used to him. He seemed really nice, even after we almost crashed (insert sheepish look) Could be a plus...if I could stop stressing about it, now. heh. I know how to drive...I all but aced the knowledge test. *sigh*

Random oddness fact: Most of the licensed people on my mom's side of the family, mom included, had to take the driver's test more than once. 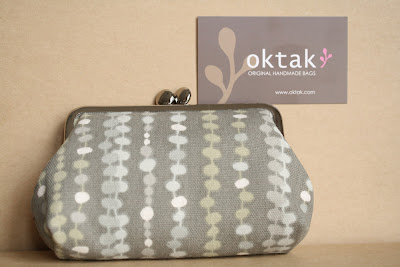 That's my Oktak purse! I won it in a giveaway she had. It's stupendously beautiful. I love it! If I ever have a shop, like a boutique somewhere (and I think there's a dearth of indie boutiques in my area) I would so love to include her purses.

Post Picture: My purse! Lovely photo courtesy of my Canon. I heart my D-SLR.
Posted by becca.elpy No comments:

Re: title...my mom says it was a slang word they used in the 60s akin to lookin' fly.

Sunday was spent watching college basketball. We live in CT and are, therefore, UConn fans. They'd lose already but there were other teams to see and the Selection Show to watch. I'm all about March Madness.

Bit of madness going on now. I sent off some items to be included in the New York Junior League Spring Auction. I'm hoping that goes well. My interview is up on My Shopping Connecticut. I love how professional blog writers make me sound. I mean, I'm just me.

And tomorrow, I take step one for my driver's test. I hope to pass with flying colors. :)

These Acutes were featured in a gift guide on 1HappyCorner. Thanks so much, Betty!
Posted by becca.elpy No comments: 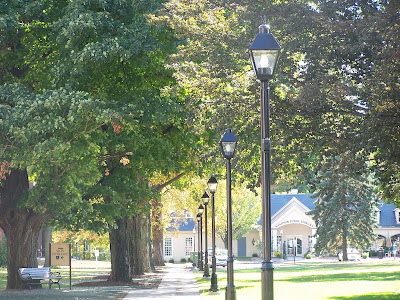 No, I'm not changing my blog URL again (learned my lesson) or shutting down my Etsy shops. Well, I did but elpy [Paper] on vacation for a while.

It's a new Vortextuality of sorts, a mental crossroads. Old frustrations, new possibilities. I'm ready to move past this, whatever block it is that I'm fighting. Wish I knew what do exactly.

Post Picture: From Oct. '07. One the way to the library. It's possible I've used it before. hehe
Posted by becca.elpy 2 comments:

From one of my new favorite Etsyans, enamored.

Woodgrain is hot at the moment. I saw this in a recent Etsy blog article and had to add it to my list on ThisNext...and Etsy faves.
Posted by becca.elpy 3 comments: 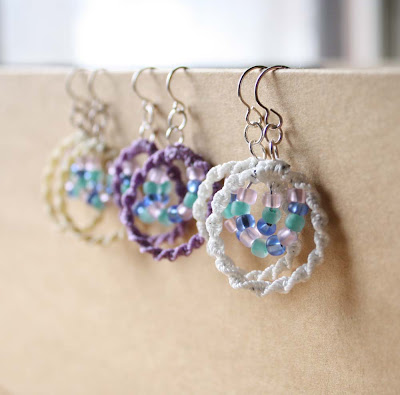 It was just gorgeous on Saturday and Sunday. Today it's a wintry mix, big wet snowflakes. Boo!

Finishe the driving class. I wish it was more insightful. Pretty much everything was a restatement of the info in the driving manual that you should read before you take the test. The only thing I came away with is that it's now nearly pointless to get your license before you're 18 in CT. Lots of restrictions and fines. There's no reason I can see for the class costing $125. It was nice to get out of the house, though.

Post Picture:Listing Helix Earrings that are pastel-themed. Perfect for spring.
Posted by becca.elpy No comments: 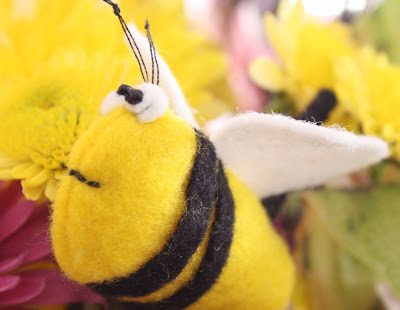 I recently bought this from Stacey Rebecca, the awesomest puppet lady. I love it. I think he needs a name. Larrabee, Bernabee...haha. Yes, the bee is a he, he told me so. :)
Posted by becca.elpy No comments:

I'm an indie-preneur, a micro-business owner constantly looking for ways to promote my work. I started this column, Seller Tips, to help me keep track of my findings and to pass them on to you.

[what's it called] Think Bakery
[where'd you find it] Twitter
['splain it please] They bake businesses.

Erin of Design for Mankind is one of my Twitter contacts. She mentioned one day that she was baking business. I was intrigued...and thought it was a typo. :P

She has partnered with Jaime of Design Milk. They're using their years of experience in advertising, public relations and copywriting to help small businesses around the world.

"Whether you’re struggling with a start-up, self-promotion or navigating the waters of social media, BAKERY has the experience and knowledge to advance your work."
Posted by becca.elpy No comments:

I love books...for reading or writing. This one's for writing. It's also pretty fashionable with it's wrap-around tie closes.
Unlined pages.

via My Handbound Books. You can follow all of my recommendations on ThisNext here.