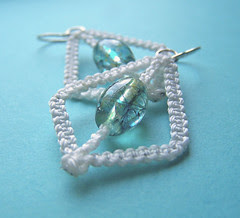 Pretty White
Originally uploaded by lpdesigns
Staying up until all hours of the night. It totally throws off my sleep cycle...which is screwy enough.

So here's a pic of the white earrings I said I made. I finally took a picture. The camera surprised me again and with a little touching up in Photoshop, the pictures looks really nice. Crisp with a touch of bokeh...I think. I really like these. I'm not sure what to name them. They look like these, but they're bigger- not huge but it is noticeable.

Tonight was opening night for our theater production. I think it went off rather hitch-less especially since our crew has undergone some major changes. It's nice to finally get to this point. It almost makes all the kvetching worth it. Almost. It's really a nice play, I love Fiddler on the Roof. The cast does a great job, the costumes are very believable and of course the set is awesome! :P
Posted by becca.elpy No comments: