By Its Cover- Walking in Circles Before Lying Down

By Its Cover is my completely independent book review column. Selections are made based on the book's cover. I'm testing the old saying in my quest to find new authors. 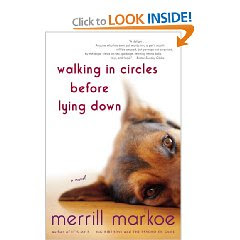 It's been a while since I've done a BIC. I was working by way through 1600 pages of Charles Dickens. Not easy. As to the review:

[plot]
This book is like Must Love Dogs with a side order of telepathy/human-to-animal psychic-ness. After breaking up with her boyfriend, twice-divorced Dawn, begins to think that her new rescue pup is talking to her. Not just him, actually, but all dogs. That freaks her out at first, but then she finds it comforting.

So it meanders along, introducing her Life Coach-to-the-stars sister, serial entrepreneur mother (who never quite succeeded at any of them) and bed-hopping father. Yep, her family's something of a mess.

Without giving away too many plot points, it comes down to her having to chose between her reconciled ex and the other guy, you know, the John Cusack-good guy that she's supposed to be with.

[op ed]
My opinion is a little tainted. I didn't like Must Love Dogs. (the two are NOT affiliated) The timeline in Walking in Circles was hard to follow, probably because I think too much. Too many of the numbers...didn't add up. (pun intended) There was a paragraph she used multiple times, like the quote about Halley's Comet in Must Love Dogs, that was used one too many times. You have to be careful with quotes. Too many or too often and they lose their punch.

The John Cusack-good guy was endearing as was the wayward co-worker of Dawn's. I have a way of falling for secondary characters. Dawn herself never quite made the break into her own that she needed. The other characters who dominated who she was got lives of the own that took them away so she was allowed to develop. But she didn't do the changing herself, she was passive, would leave and let them decide.

The mother and sister make this very eccentric, to little semi-prude me anyway. A decent beach read, quick easy and light. Not high on my list, though.
Posted by becca.elpy No comments: