By Its Cover- The Storm by Frederick Buechner 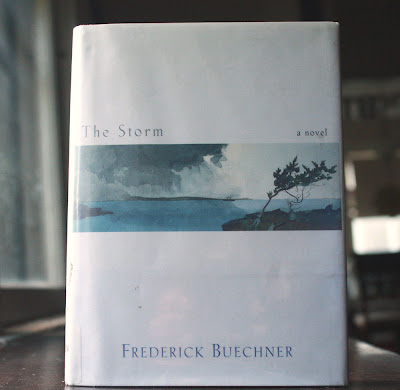 Sometimes you read a book and upon finishing it you squeal a little squeal, cry a little tear, sigh a little sigh, each in complete contentment. Then immediately you want to read it again. That's how I felt about The Storm.

It's the quietly told story of Kenzie Maxwell, a man of nearly 70, thrice-married and kinda of shiftless. He's had some late success as a writer. But the story is more about the past and his group of loosely related relatives.

Twenty years ago, while working at a shelter for teenagers run by his brother, Kenzie became romantically involved with a 17-year-old girl named Kia. She gets pregnant and has a child, a girl named Gabrielle...called Bree. During the birth, Kia dies.

This scandal forces the brothers apart and Kenzie to leave the city. As so it goes until it comes near Kenzie's 70th birthday. He's married now, to wife #3. They live with her adult son on a gated community sort of island off the coast of Florida. Bree, who's been raised by Kenzie's sister, has been invited for the occasion. Dalton- the brother, and his stepson, have been summoned to the island by its proprietress...he's her lawyer. So a family reunion is all but imminent. How will it go off? Dalton's never harbored any anger or resentment toward Kenzie. Can they be reconciled? Can sense be made of this disjointed family?

This, to me, is what The Wasp Eater tried to be: dreamlike and lucid. Buechner's style is enveloping and deftly takes you in the heads of each member of this small cast. Much of the book is relating the backstory of the characters, yet it doesn't have the feel of a history book. It's distinct, thoughtful and well-crafted, full of emotion and wonder in its own still way. I enjoyed it.
Posted by becca.elpy No comments: