I've been on Etsy for almost 3 years. (What?! I know, it surprises me, too.) For about that long I've been racking my brain for a little something I could include in orders.

I got it! Those are little 1" buttons that I designed and christinerenee pressed for me. They say thank you in various languages, Hebrew, German, Swahili. I tried to put a familiar one on each and have the color bar that has become part of my brand. I love them.
Posted by becca.elpy 1 comment:

me.smile
Originally uploaded by elpy aka notrachel
You may remember that the largest state paper, the Hartford Courant, wants to feature me. The writer request a picture of me and some of my wares.

I had one idea about posing behind the sign I made for my tent. But for some reason my conceptualization of size isn't that great. The sign is larger and I am smaller than I thought. It looked like I was in a bathtub, not what I had in mind.

After much finagling and tinkering, the sun came out and I got this. It shows me, a necklace of mine, (mine, not the one in the shop) and my shop name. It doesn't show how bad my hair looks or that I have on my fashion rebel slippers. Hehe.
Posted by becca.elpy 2 comments:

First Video- What I've Been Doing

This was entirely unplanned, but I made a video. I think I was inspired by moop's video. You can only hear my voice and see my hand and I will admit that I reshot it several times, getting lost mid-sentence. But I like it.
:)
Posted by becca.elpy No comments: 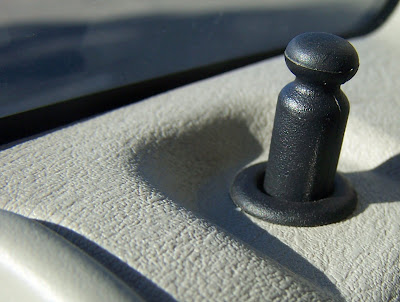 So I had my portrait session yesterday. It was quite a learning experience. I think I tried too hard, and should have just done what I know. But it's okay. I'm glad I did it.

Must get pics to the Hartford Courant writer. Have two custom requests to do. And miles to go before I sleep.

[sports aside- World Series]
Tampa is totally picking the wrong time to turn into the Tampa they've been until this year. Completely.

Post Picture: The lock in the car. Taken while waiting for the portrait-ees. heh
Posted by becca.elpy 1 comment:

trade 2/3- scoops
Originally uploaded by elpy aka notrachel
I haven't been around for awhile. Took a wee break from blogging to catch up on other things.

Today I did a church market/bazaar thing. It was interesting, a little last minute, but the baked goods were delicious! My new photo display stood up pretty well to the wind, except when it got up to gale force. It carried the tent away. That was actually kinda funny. Note: No more outside shows from late Oct. to late March. I'm in New England, it's cold, like really cold.

Tomorrow, unless it rains, will be my portrait session. I'm a little nervous, but I think I can do it. I hope I can. If it rains, which it might, we'll have to reschedule.

I've also sent two things to be included in the monthly giveaway on Modish. I love that blog. I'll be sure to post when the giveaways are up. 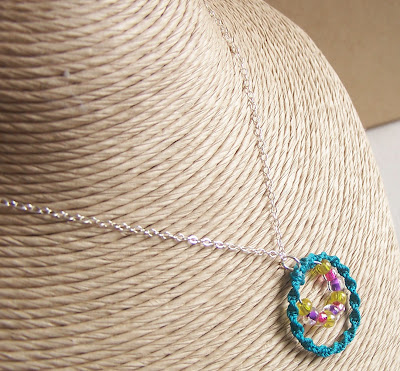 I finished one custom order. It was the newest request of the three I have, but I was most desperate to get it done. The buyer found me at the show I did earlier this month. She liked the earrings and wanted a necklace to match. I'd been wanting to try to make a necklace using an earring part as a pendant. Now, I have. It's simple visually, just the pendant, a chain and a closure, but it works. I hope she likes it.

Post Picture:The necklace on my paper twine bust. I want more of those.
Posted by becca.elpy No comments:

Bits and Pieces and Coasters

New item at the shop. I have one more set to photograph and two to finish...ok, two to start. The mind is willing...

I'm back at my temp job. It's interesting to be out with people, to observe and listen. Around 2, though, I find myself wanting to go home, wishing for windows in the room where I work, wishing I could at least tweet the things I hear people say. So many interesting opinions from the mundane to the political.

I have 3 custom orders to work on. I also really want to buy a new camera for my portrait session on Sunday. I have a feeling that, like wearing new shoes before they're broken in, I shouldn't. Or if I do, I shouldn't use it. But I really want a new camera and my parents are willing to go in half with me and there's the perfect one on sale and...

I started photographing some of the things that I'd made for the show but hadn't made it to the shop yet. These are Toast Dots Earrings, the first of the third set...thereby earning them their own shop section.
Posted by becca.elpy No comments: 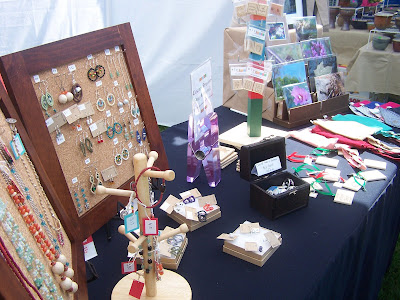 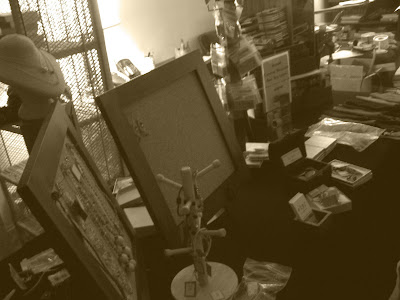 This is it! Okay, it's almost it. It's like the day before Christmas almost.

Tomorrow is my first big show. It's right in the center of my hometown, naught but a hop-skip-and-jump from my house. Literally, I could walk there, but I have too much stuff to bring. It's from 9-4.

I've been painting, and gluing, knottting and burning to get back these last few weeks. I've learned a lot, about pacing myself and that a simple project can easily get out-of-hand with an active imagination. It's made me thankful for my family, for their support. Really, it's been a long time getting to this point and I was pretty difficult. But I'm glad I'm here. I'm working harder than I have at any job, but I'm more content, satisfied.

Post Picture: Pre-show set-up. Realizing nothing in my display is the same as it was here. It's more junky than it will be tomorrow, I'm tinkering still at the time of this post. I've out-grown my table.
Posted by becca.elpy No comments: 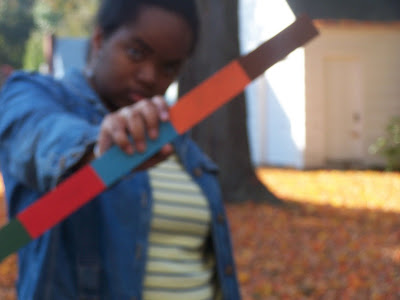 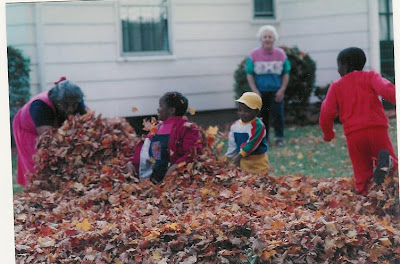 Bought the last of the items needed for my new display. Things still need to be finished up but I'm glad everything been bought. Next time, I want to reinvent myself, I'll just dye my hair. hehe

Post Pictures:
Top pic: Me today with my totem...magnet display pole.
Bottom pic: Me and the brothers, mom and our neighbor playing in the neighbor's leaves circa 1996
Posted by becca.elpy No comments: 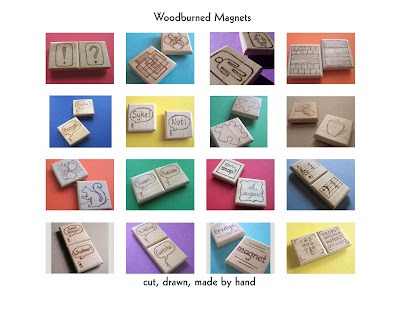 It's been all about magnets today, hopefully I'll get to burn some later.

I'm trying to put together a design folder for my show on Saturday. Have four pages done so far, five including the cover page. Eventually I want to get a lookbook printed by Blurb I have a few more projects I want to try/finish before that...I want those in the book. So for now I'm printing the pages off at home. The Post Picture for today is the magnets page.

Have also cut, drilled and painted the magnet display. This show prolly wouldn't have taken as much out of me, if I hadn't tried to redo my entire display along with making new pieces and duplicating things I have. I'll figure this out.
Posted by becca.elpy No comments:

Prepping for the show= being generally exhausted. I'm still getting into the swing of all this, the whole idea of fairs/markets/shows. I think I have outgrown my 6' table, but don't have the money for a second at the moment. By this time next year, I'll prolly be rocking a three-table display at shows that will allow it. Heh.

Today I accomplished a whole lot but finished nothing. There are lots of steps, little things to be done...and almost everything that gets checked off actually spawns a million more things. *sigh* It never ends in a way that's both invigorating and frustrating. Mostly invigorating.

I'll do a dry run in the next day or two, experimenting with my mostly new set-up. That'll be exciting. Hoping for good weather on the 11th (show day), sunny and dry at least.
Posted by becca.elpy No comments:

The little Curvatures are listed. I want to make them in every color I have...almost. Sometimes, when I look at a color, it just doesn't jive with the shape of the design. Is that strange?

It's cold today. And cloudy. I'm thinking about tea and making potholders. Yes, it seems I may not be able to put that part of my life away just yet.
Posted by becca.elpy No comments: 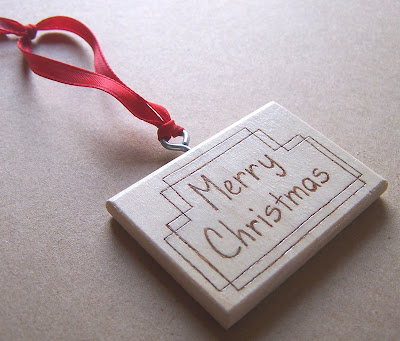 The show in town is in 9 days. I'm thinking about it a lot. Thinking doesn't always convert into action. Especially when I find interesting sites online. Too easily distracted.

I'm trying to get back into listing on Etsy. For as much as I want my own site, Etsy is it for now. I can't abandon it.

Started working on ornaments in August. I came up with four designs. I'd like to come up with another four. If you have ideas let me know. I totally appreciate help in the brainstorming process.

By Its Cover- Little Town Where Time Stood Still pt. 1

September was a rather booming month for me. Very thrilling stuff. October has promise. I can't wait to delve in.

One hobby-ish thing I have is reading. I love to read. I started pre-school at 3 with the goal of learning to read. Hence, the first day was a little disappointing. Heh.

At any rate, lately, I haven't gotten to it nearly enough. But being busy with elpy work is wonderful. I just finished re-reading Pride and Prejudice. That is one of Jane Austen's finest. I didn't want to re-read any of other books I have, so I went to the library.

Deciding to pick something random by someone I'd never heard of, I got Little Town Where Time Stood Still by Buhomil Hrabal. I'll let you know how it is.
Posted by becca.elpy No comments: