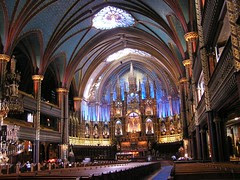 Montreal Notre Dame Cathedral inside
Originally uploaded by panoramicviewer
I didn't take that picture. I DID go to that church. My gosh, it's beautiful. I can hardly comprehend how much time it took to make it all. It was really weird, for severe lack of a better word, because I have a puzzle of this place. I had no idea that it was in Montreal.

What was I doing in Montreal? I went to visit my cousin, in school in Plattsburgh, NY. P-burgh, as she called it, isn't THE place to be. (not that that matters much to me) She took me, and some of her other friends to Montreal. We attempted to go to some clubs. Ended up only getting in to two. Still it was fun, milling around a city with no 'adult' supervision.

This was so great because I had been aching to get away from home. I needed this, badly. But I was never so happy as when we got through customs, back into the States. I was only there for about 24 hours, and I loved it. But then I wanted to get back to the familiar. And even though I'm not at all familiar with upper New York state, it was enough. I don't think it's a superiority thing. Montreal is a beautiful city, unlike any I've been to in the US. I'd definitely go back. It was just that for as much as I had wanted to get away, I wanted then, to get back.

I wish I had brought the camera though. I kept seeing things and thinking, that would make a great pic. I'll learn one day.
Posted by becca.elpy No comments: