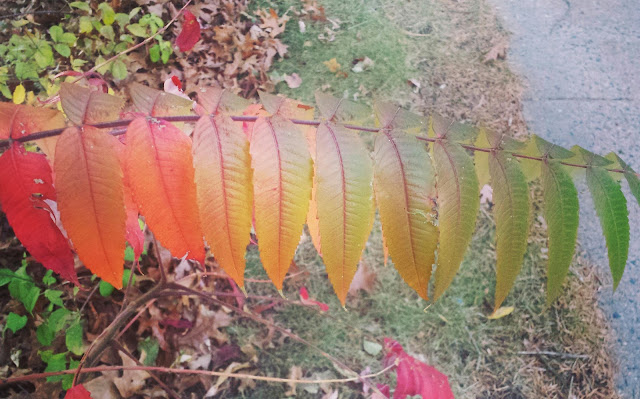 The end of many things

The wreath I made is on the door at last. I wrote a bit about on my blog. Link in my profile. .... ... .. . #projectdepaint #fallwreath #wreath #makerlife #handmade #handmadewreath #fakeflowers #fauxflowers

With a few weeks of fall remaining, I finally put up the wreath I made...last year? Sit back and relax into this long story.

This task clung to my to-do list (that sometimes I completely lose track of) for over a year because it turned into a project that kept snowballing.

I finished the wreath (and made a duplicate with the intent of listing it on Etsy maybe) with relative ease. But when I came time to hang it, I realized what a wreck the sun, layers of paint and time had made of the door.

It wouldn't suit for listing pictures. It would have to be redone. Of course the layers of paint (amounting to about 1/8" in some areas) and time and sun made the paint unwilling to come off. So my original plan of getting it stripped and re-stained in 2 weeks (insert laugh here) stretched easily (though begrudgingly on my part) into 3 weeks...

Then it was too cold to use the chemical stripper without freezing everyone out of the house.(Because you have ventilate the area well or you'll die from the fumes. But it was winter by this point. Thanks, New England).

Then I got a part-time job at my sister-in-law's flower shop. So between that and it still being kinda cold, there was a limit to how many days I could work on it.

Then I decided if I'm doing the front of the door I might as well do the back. That side had only a couple layers of paint but had tar-like wood stain underneath the paint that was equally difficult to remove. I pressed on.

Then the stain we bought to put on the fully stripped door didn't look like it did on the wood swatch at the store, but I thought I could make it work and so applied a coat to the entire front of the door which...

Now the hunt was on to find a proper stain that would be show up the way we wanted. Enter Minwax and Home Depot. How we'd gone there before and totally missed that product...y'know, it happens. (FTR, finding stain for the back of the door was much easier.)

Then there were 1000 details to the project's end- that moment when then last 10% of a project feels longer than the preceding 90%:

Once the door was done, front & back, I still needed to actually hang the wreath. The picture hanger I'd used before eventually led to disastrous results with the wreath I made for Christmas. So I wanted something sturdier...but what? How?

Talked to Mom again and we were able to flesh out an idea. (She said her brain hurt afterwards and we only talked for about 15 minutes. I'd been consulting Google and thinking about it for months). Found a hook (which would mean marring the beautiful door front but I'd do it. It's a pretty brass-y hook, so it adds to it.), tried out my ribbon idea (which worked beautifully) and this Sunday, I put the hook on the door, put the wreath on the hook, praised God when it held, threw my hands in the air and rejoiced.

I joked with the family that when I move out, I'm taking the door with me. They don't love/hate it like I do. They don't know it as intimately. They have not made friends and enemies with its curves, carves, angles.

I do wonder though, if this is an inescapable part of me: to fall victim to project creep; to bite off more than I think I can chew but then force my way through; to vastly-VASTLY- underestimate how long something will take to complete and in doing so set myself to feel like a failure when my impossible goal isn't reached? How do I help me?

Maybe that can be my next project.