Sketch - That is IT! 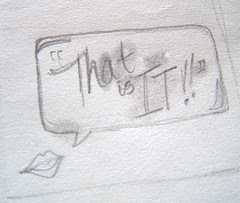 Sketch - That is IT!
Originally uploaded by lpdesigns
So I joined another Flickr group, started by the lovely mlee, for sketching. I wasn't going to because I don't sketch. I definitely don't share the sketches I do. Because I have been such a perfectionist, it's a laborious thing, that I don't really like. But it's necessary at times.

My mom requested a magnet...or something, for her hairdresser. "That is IT!" is a saying of hers, the hairdresser. I drew a blank (heh, pun unintended) like I always do when first presented with a custom request. Then I took out my cheap-o sketch book, that is really filled with more writing that drawing and drew out this. I saw it in a flash and tried to sketch it out. I guess I CAN do it better than I think I can. I think...maybe.

I can't say I'll sketch everyday. A lot of my work just doesn't require it...to me. But I'll give it another shot. Lately I've been learning to give things, people, a second chance...or third, fourth, eighty-ninth. Haha. I'm so much better than I was. I can't give up now.
Posted by becca.elpy No comments: