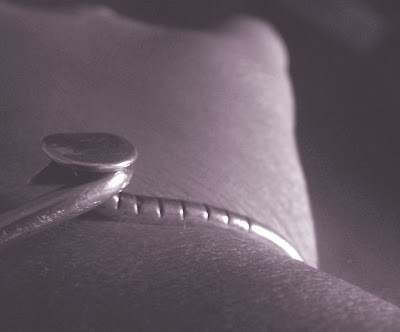 I have to projects going on at the same time. I could make it three, but I'd like to get a little further along in one first. They're both jewelry so it's good. One's a duplicate necklace...I think. The other is a bracelet. I want it to be a necklace, but I think if I make a bracelet first I can get a feel for what I'm trying to do. I can't sketch it because it's rather chaotic. It could look really nice, or really amateurish. I'll have to see...if I ever stop undoing it.

Post Picture: My arm. The self-portrait I like best from today. I've taken (in more than one sense) to wearing a bracelet that was once my mom's. Her college boyfriend gave it to her, like when she was in college. I just think it's cool. It looks like a bent nail. Tinted and stuff in PSE. Flickr link.
Posted by becca.elpy No comments: