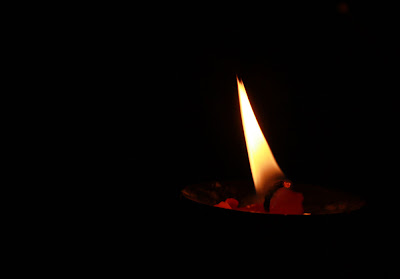 It feels trite, the obligatory candle-in-the-dark pic invoking the idea of vigils and solemnity, attempting to express our sorrow. I'm shaken.

This week has been rough. But all that proceeded seemed trivial in the face of the tragedy that unfolded in Newtown, Connecticut today. Twenty-eight people lost their lives, in an elementary school not much more than 45 minutes from my house. I was at work, checking the news as I do as a distraction from the boredom of processing paperwork. I watched the story grow more horrific, from potential accident to full-out massacre...as Christmas music- with its call for cheer, peace and goodwill, softly played in the cubicle in front of mine.

"They're babies!" a lady in the other side of the room said as the death toll rose: one to twelve to twenty-four to twenty-seven. "They're just little babies!"

"I'm sorry," another said, "I need to step away." She's the mother of a young child.

All I can think of is the parents, the parents who lost a child. "You'd rather have your legs chopped and your arms chopped," said another co-worker in reference to the anguish a parent would endure in place of having their child suffer. We watch the news reverently, the broadcast flip-flopping between a national team and a local one. Their familiar faces reminded us that it happened here, this time it is literally close to home.

I think of the brother wrongly accused, making the longest drive of his life from New Jersey to Connecticut. "It was my brother," he told a fried as he set off. And I'm moved to tears.