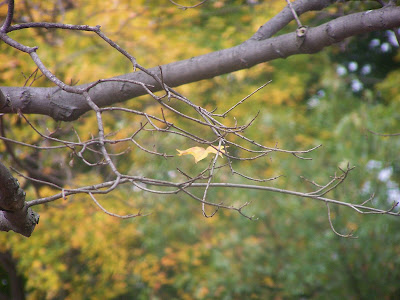 Eventually they made on change too many for the little band of workers that had gotten hired with me. One by one they left, most to the same company that opened a new branch in the area. I stayed there too long. But the time I finally left, I'd lost touch with everyone I'd really worked with, who could help me get a new job. It was weird, rough...and why I started selling on Etsy.

I'm able, today, unfortunately to see some parallels between that situation and my relationship with Etsy. They say those who don't learn from history repeat. I've learned my lesson.

Will I leave? Not all at once, at least. But things have changed, my ideas have changed. It's weird, rough. Like that job, I like the other sellers I've worked with and gotten to know. But do I want to be the last one there, the only who remembers how it used to be? There's wrong nothing with hope. But sometimes, you just have to let go.

Post Picture: A pic a took a year or so ago, of my neighbor's tree, the last leaf that autumn.
Posted by becca.elpy 2 comments: